What is Socialisation and Puppy Preschool?

Puppy Preschool comes in many forms depending on who is offering the service, the level of training and the method of training and knowledge of the organisation. Some will offer large classes with many puppies, some will have class size limits, some will promote methods of training and socialisation that differ from other classes on offer.

So how do you know which is best for your puppy? Firstly, let’s delve in to the why of Puppy Preschool and how it came about…

In the 90’s, when Veterinary Behavioural Medicine was in its infancy the vets at the forefront of behavioural medicine took into account the work of Scott & Fuller (Scott, J.P. (1958). Critical periods in the development of social behaviour in puppies. — Psychosom. Med. 20: 42-54) and developed a program where puppies could experience a broader range of stimuli in a positive environment than they otherwise would, especially as dogs were now bound by fences instead of roaming the neighbourhood, living in apartments and socially isolated for many hours of the day instead of interacting with neighbouring dogs and children while kids were at school. These social restrictions initiated by many councils limited the day-to-day learning of many dogs as well as social contact with not only humans but other dogs. This lead to an increase in the number of dogs presenting for behaviours resulting from poor social exposure. So the Puppy Preschool was created as a way of providing this experience when puppies had no other opportunity to do so.

Puppies (and indeed all animals) have what are called sensitive periods in brain development. These are time frames within which the brain is highly susceptible or receptive to learning and creating new pathways through associative learning, and trial-and-error learning (also called Operant learning). The early sensitive period, often referred to as the socialisation period extends from about 2-3 weeks in puppies to about 16 weeks. So from the time they can see, hear and move around they learn from their environment about what is rewarding, or to be avoided, who is nice and who is not, what creatures are friends and who are foe and so on. The brain is also highly connective at this time; this means less repetitions are required to achieve a synaptic connection in the brain than a mature brain (for basic learning). When this period closes, the brain does a little bit of ‘pruning’ and snips off all those synaptic connections that aren’t being used much, which is kind of like closing the back roads so all the neural traffic goes through the roads most travelled. By doing this, the brain selects for those connections that are strongest and makes these the highways of the brain, and they become the default pathways that are activated in a given context.

So if we can set things up so that the puppy’s neural highways consist of positive experiences with other dogs, people of varying ages, sizes and appearances, various substrates, noises, textures… you name it, then when this period closes the puppy’s learning experience leaves him with a positive behavioural response towards these stimuli. After all, emotions drive behaviour! By broadening a puppy’s ‘database’ of stimuli through gentle exposure and creating happy associations with the stimuli, as well as rewarding appropriate behavioural responses to the stimuli we set the puppy up to succeed in the future by eliminating uncertainty through learning, and providing default behaviours that will earn further reinforcement from the stimuli.

Is that all there is to it? Just exposure? Unfortunately not. Behaviour is a lot more complex than that but it’s a start!

Can you do socialisation wrong? Absolutely. And it can completely derail your attempts to make your puppy more social if you don’t take into account the following points:

1. Secure Base: Puppies essentially have the cognitive abilities of toddlers, and it’s generally accepted that most pet dog-human dyads are comparable to a child-human dyad. Attachment Theory (pioneered by J. Bowlby) explains the need for a secure emotional base for infants to explore their environment with confidence (this is usually the mother): and this exploring leads to learning which leads to confidence and resilience. When things go wrong infants return to their secure base which now acts as a Safe Haven where they can feel safe AND secure and reach a normal emotional state again. Without these two effects children can develop attachment issues, anxiety and problems with social integration (see the Strange Situations by Mary Ainsworth). When puppies are adopted out, which is normally before they would naturally leave their mother, they are removed from not only their Secure Base but also their Safe Haven AND all their social familiars. What an emotional roller coaster for an infant brain to handle! So it is recommended that you allow your puppy 3 to 7 days to acclimate in his new environment quietly and gently and form a new Secure Base that he can then use to ‘diffuse’ any fear or hurt when exposed to his new world. 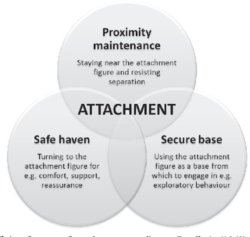 The role of the primary caregiver in order to foster emotional resilience
https://www.semanticscholar.org/paper/Best-of-friends-Investigating-the-dog-human-Rehn/73ac61b4e8b57f72026280bb1cbfbf66abac9f2f/figure/0

2. More is Not Better: Owners often try to do as much socialisation as they can, or do the 100 people in 100 days etc. which has been highly advocated but is often either unachievable for the owner or detrimental to the pup. They are just babies and as such have a need for a lot of sleep; their little brains get full pretty quickly and they need to sleep to back up all those experiences onto their hard drive. Persistent and constant exposure to the point of having the puppy fall asleep can be detrimental as tiredness and lack of REM sleep impairs learning and increases cortisol levels (stress hormone), and can reduce emotional resilience. We all know that being tired makes you tetchy, and that sleep is restorative. Persistent emotional stimulation can also prime that little brain for reactivity as we are teaching it to never shut down. So short sessions are better – one person at a time or a lot of people/a new environment for a short time and then back to home base to diffuse and rest without worry of unknown things being around. Take note of your puppy’s behaviour and if he is disengaging, showing disinterest or falling asleep it’s well past time to go home. If he is fearful then the stimulus was too close, or loud, or there was too many, or it went for too long and you will need to adjust this in future. 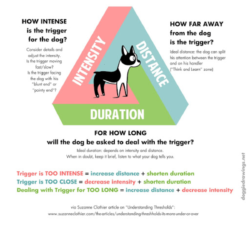 3. Exposure must be positive to have the desired effect: It’s not enough to just plonk your puppy down in the dog park. What happens then? The pup gets rushed by a bunch of curious but unfamiliar adult dogs, and is now trapped in the corner of the park without a chance to escape the situation. The most common response is fear (exactly the association we don’t want), or aggression in an attempt to create some space for himself. Either way what has the pup learned here? That other dogs are scary and mean (even if they aren’t or that wasn’t their intention this is the experience the pup has had). Often a well-meaning owner sees this response and removes the pup from the park and now the only learning the pup has with other dogs is negative. So next time he comes into that situation he’s learned it’s something to be fearful of, or that he needs to defend himself….. And without further positive exposure to counter this experience this will often lead to a dog reactive dog. A better way would be to have your pup engage with one balanced adult dog in a controlled environment so that he is not so overwhelmed and interactions can be interrupted if needed before they become scary. So by watching your puppy’s body language you can discern if he is happy, hesitant, scared or playful and adjust his exposure to the target stimulus accordingly.

If your puppy does get overwhelmed and has a negative experience it’s not the end of the world! Whilst fear does stick better than joy in the brain, you can overwrite that learning by providing lots more positive exposures to the same stimulus and tipping the scales. However often it takes many more positive repetitions to outweigh a single negative experience.

4. Consider the Breed of Puppy you Have and the Likely Behaviours you will Observe: Dogs come in many breeds, and that is because we bred them to have different jobs for us. Until about 50 or 60 years ago many dogs worked for their tucker and very few were exclusively pets. This has changed profoundly now but the DNA of these breeds is still wired just as it was originally bred for. This means understanding what your dog was bred for, and knowing how this can affect his interactions with others. Of course there’s tons of variation between individuals, and within breeds, and also between show and working lines, but we do consistently see behaviours in breeds that are the reason they were selected for their jobs. For example if you have a herding breed they will generally be affable to known people though may have a closed circle of friends. Why? Because they were bred to work closely with their human all day, and allowing other dogs on the property didn’t make a good shepherding dog when they ate your sheep. Be prepared to offer these guys a ton of activity and exercise. Got a guardian breed? Then you can expect to have to put a LOT of work into these dogs to foster a social outlook and tolerance of others. These dogs were bred to stay in the paddock, not the house, and to ward off all strangers from the flock without human guidance so it’s not surprising that these guys are often overwhelmed in urban situations and untrusting of strangers. Terriers were bred for boldness, so expect them to be pushy and pick fights they won’t win. These traits WE BRED into these dogs for the jobs they no longer have do play a role in how we can preemptively manage them to set them up to succeed in today’s environment. (for more information on ethology see Kim Brophey’s book Meet Your Dog).

Terriers and some Hounds like to dig, especially when they can hear or smell small creatures. They are hunting breeds.

How does Puppy Preschool help my puppy?

If you have questions about socialisation then get in touch with us for a chat. If you would like your puppy to attend Puppy Preschool NEVS has staggered streams running so that intake is fresh every 2-3 weeks. Just email us at puppypreschool@newenglandvetservices.com.au and we will be in touch about the next available class!