What is Gastric Dilatation and Volvulus (GDV)?

Gastric Dilatation and Volvulus (often called “GDV” or “bloat”) is a life-threatening condition in which the stomach fills with air (dilatation) and twists upon itself (volvulus).

How does it occur?

Production of gas is a normal part of the digestive process. Bloat occurs when something prevents the normal flow of food from the stomach into the small intestines meaning the gas that is produced has no way to escape. When the stomach begins to bloat it becomes enlarged and stretches, eventually becoming so large that it twists upon itself (volvulus). This twisting also causes occlusion of some very important vessels that supply blood to many organs (particularly the stomach wall and spleen), putting this tissue at risk of necrosis (cell death) and unfortunately this is something that is irreversible. 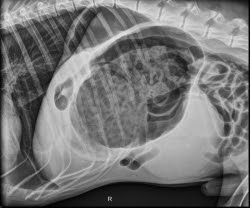 This X-ray shows what the stomach looks like when it is bloated and twisted – the gas cannot move out of the stomach and continues to accumulate.

GDV occurs most commonly in large breed, deep-chested dogs, although all dogs are at risk. Breeds that are particularly predisposed to this condition include Great Danes, Weimaraners, Saint Bernards, Irish Wolfhounds and standard poodles.

Regardless of the underlying cause, gastric dilatation and volvulus is a life threatening condition that requires aggressive treatment and surgery to correct and even with this early intervention and surgery it is associated with high mortality rates.

Early signs of bloat are often associated with abdominal pain and can include:

As the disease progresses the stomach continues to distend/stretch making the condition more painful and breathing more laboured (more pressure from the stomach on the chest), eventually the dog will become very weak and collapse. These animals often present with pale gums, weak pulses, rapid heart rates, collapse and pronounced abdominal distension.

Intervention and surgery are best performed early in the course of the disease as mortality rates increase with the severity of the disease. If your pet has exhibited any of the above signs then you should contact us immediately.

Stabilisation is critical and often begins with aggressive fluid therapy to improve circulation and oxygen supply to tissue. Gastric decompression often follows, which may include passing a stomach tube into the stomach to release trapped gas/ fluid. In some cases the trapped gas may not be able to be released with a tube and a catheter may need to be placed directly into the stomach to release the air.

The patient will proceed to surgery as soon as possible, depending on how stable they are. Surgery involves full exploration of the abdomen and de-rotation of the stomach. The viability of the stomach, spleen and surrounding organs will then be assessed. Sometimes part of the stomach or the spleen may need to be removed if the tissue has died from the lack of blood supply. Once the stomach is returned to its normal position it will then me permanently fixed to the abdominal wall to prevent the condition from happening again, this procedure is known as a gastropexy.

Unfortunately even with successful surgery other complications can occur secondary to poor oxygen delivery to other vital organs (hypoxia). The liver, kidneys and other important organs can suffer hypoxia and cell death, cardiac arrythmias can also develop as a result of this. If the stomach wall is compromised, as is often the case, bacteria can cross into the bloodstream and cause a bacteremia (blood infection). All of these complications are life threatening.

Fortunately there is a procedure that we can perform early in your dogs life to reduce the risk of this horrible, life threatening disease occurring.

The procedure is called a prophylactic gastropexy and is often performed at the same time as desexing, although it can be performed as a standalone procedure if you do not wish to desex your pet.

The procedure involves opening up your pets abdomen and permanently tacking their stomach to the abdominal wall through a small incision in both of these structures, thus making the stomach unable to twist if it does become bloated. The procedure is reasonably simple and quick to perform.

We recommend prophylactic gastropexy to all at risk/ deep chested breeds. 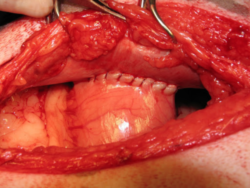 This is a photo of a completed gastropexy – you can see the suture line where the stomach has been attached to the abdominal wall. When this heals a permanent adhesion will form between the stomach and abdominal wall preventing twisting of the stomach.

Although the evidence is unclear it is also thought that feeding several smaller meals throughout the day (rather than one large meal) and avoiding exercise/ playtime around meal times can help reduce the risk of bloat.

If this procedure is performed in association with desexing the post-operative care is the same as it would be for a pet that has been desexed. The patient should be kept quiet for approximately 7days after surgery to allow healing. Running and jumping should be prevented during this time. Swimming and bathing should be avoided so that the incision is kept clean and dry. Your pet will be sent home with pain relief medication and occasionally a Elizabethan collar to prevent licking of the wound.

IF YOU ARE CONCERNED THAT YOUR PET MAY BE SUFFERING FROM BLOAT PLEASE CONTACT US IMMEDIATELY.

If you have any questions regarding bloat or prophylactic gastropexy, or would like an estimate for the procedure then please get in touch with us 🙂