Cranial cruciate ligament (CrCL) disease is a very common cause of hindlimb lameness in dogs. Partial or complete rupture of the CrCL can occur causing instability of the stifle joint (knee). Injury can cause acute pain and over time leads to chronic degeneration of the joint, cartilage wear, and in some cases meniscal injury (cartilage tear within the joint).

Diagnosis of CrCL is achieved by palpation and manipulation of the joint. Disease of the CrCL result in instability in the joint which can be detected by performing a cranial drawer movement on the stifle. Usually this requires sedation to fully assess as most dogs will tense making the instability less obvious. X-rays are usually performed to further assess the joint and degree of degeneration present. 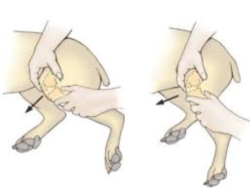 Many surgical options have been described to address the stifle instability that occurs with CrCL disease. At the present time, the most commonly performed operations include the lateral fabellotibial suture, tibial tuberosity advancement (TTA), and tibial plateau-leveling osteotomy (TPLO). With all these surgical procedures, the joint is surgically opened and examined, both meniscus are inspected for tears and any torn portions are removed. In most cases the damaged cruciate ligament is also debrided. 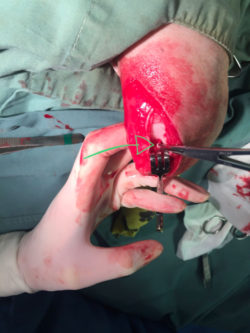 Is an extracapsular technique (outside the joint) that stabilises the stifle by placement of a nonabsorbable suture around the outside of the joint. This suture is secured with hand tied knots or a metal crimp. When tightened this suture eliminates cranial drawer and abnormal movement in the joint, in effect mimicking the natural action of the CrCL. Over the initial months post surgery the body develops a fibrous tissue reaction around stifle which ultimately provides the long term stability, as the suture placed during the surgery often stretches or breaks over time. The lateral fabellotibial suture can return the majority of dogs back to full activity but is most suitable from small to medium breeds or larger dogs that lead a more sedentary lifestyle. 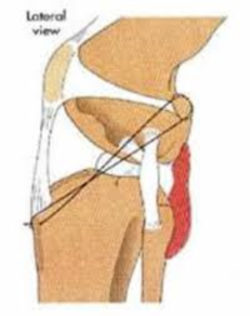 Tibial plateau- leveling osteotomy (TPLO):Is a surgical technique that changes the biomechanics of the stifle joint, eliminating the functional need of the CrCL. This is achieved by making a cut (osteotomy) in the proximal tibia (shin bone) and rotating the plateau to change the tibial plateau angle, thereby eliminating tibial thrust (physiological force that occurs with each step). 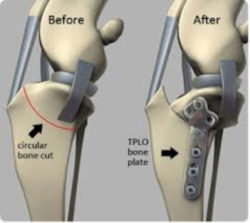 Tibial tuberosity advancement (TTA):Is another surgical option to treat CrCL disease that also works by altering the biomechanics of the stifle joint. In this procedure a cut is made in the proximal tibial at the tibial crest (top of the shin bone) and the crest is advanced forward. This technique alters the direction of pull of the quadriceps muscles on the patella (knee cap) tendon. This eliminates tibial thrust when the quadriceps are contracted during weight bearing (providing similar tension to what the cruciate ligament would). 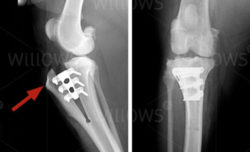 The long term outcome for most patients using any of the above techniques is usually good. This is influenced by the activity level of the dog, the dog’s size and whether the dog is overweight. Unfortunately, a significant percentage of patients will injure the CrCL in the opposite knee within 3 years, and a small percentage of cases may damage the meniscus within 1-2 years of initial surgery. These dogs develop lameness that may be associated with a palpable or audible click or pop as the stifle is flexed and extended. Further surgery is sometimes recommended in these cases.